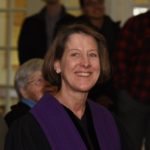 Last week Mark’s Gospel described the beginning of Jesus’ ministry, including his first temptation in the wilderness.

This week, we move to the beginning of the journey to the cross, including what some scholar’s call Jesus’ second great temptation.

Peter has suddenly “seen the light” and recognized Jesus as the messiah, but today, on this second Sunday in Lent, we realize that Peter has not yet understood what had been revealed to him.

Here ends the reading of God’s holy word. May God add to our hearing and understanding, God’s blessing. Amen.

Please pray with me.

God of all generations, whose revelation in Jesus Christ calls us to self-denial and risk-taking service, we dare to listen for your call, knowing that it may draw us out of step with the expectations of our culture, realizing that you may lead us away from our dependence on things we have accumulated.

We take that risk, longing for the day when all the families of the nations shall worship before you.

May the words of my mouth and the meditations of my heart be acceptable to you, O Lord, my rock and my redeemer. Amen.

Abram had a deep abiding faith in God but he was a bit skeptical about the promises God was making.

A multitude of descendants, a child, nations?

It all seemed too good to be true to Abram.

Abram’s faith, however, allowed him to open himself up to receive the blessings that God wanted to bestow.

Abraham, was a man transformed by the power of God.

Peter, on the other hand, had come to believe that Jesus was the long-awaited Messiah.

He had been a witness to the transfiguration of Jesus along with a multitude of miracles over the time he has spent with Jesus.

When Jesus predicted his imminent death (something that did not jive with Peter’s picture) Peter tried to correct Jesus in a rather patronizing way.

Jesus’ response was strong and surprising.

He called Peter “Satan” not because he was judging Peter, but because, in that moment, Peter had become a tempter who was trying to lure Jesus away from his purpose.

Peter’s mistake was to believe that his revelation of Jesus’ Messiahship gave him the right to be certain about who Jesus was and what he had come to do.

He had moved from faith to certainty, and in the process, he became a tempter and an obstacle to God’s work.

When we think we know how God will act we can almost always count on being wrong.

The news this week provided several opportunities to reflect on this further.

Reverend Billy Graham’s death brought out a host of commentaries on who Billy Graham was and what he believed.

It was interesting to read and hear the history of this deeply faithful, non- partisan, religious man and how his legacy has been politicized and distorted by those who have come after him or those who claim to speak for him.

One source described him this way:

“Mr. Graham has preached the Gospel to more people in live audiences than anyone else in history—nearly 215 million people in more than 185 countries and territories—through various meetings, including Mission World and Global Mission.

Hundreds of millions more have been reached through television, video, film, and webcasts.

Billy Graham was named by Americans as “One of the Ten Most Admired Men in the World,” a record-breaking 59 times with the Gallup poll.

He was known through the years as not only a world-renowned evangelist, but as a kind, non-judgmental, accepting, and humorous soul.

His message is timeless, powerful, and relevant for today.

The phrase, “the Bible says,” resounds throughout his sermons, and the truth he preached for years still transcends all barriers of denominational differences, age, nationality, and culture.

It has stood the test of time and generations, pointing millions to Christ.

The Reverend Billy Graham preached God’s Word with conviction and passion for over 60 years.”

What was interesting to me in these accounts of Graham’s life was how rarely I had heard of him as a “kind, non-judgmental, accepting soul.”

For my generation, Billy Graham was associated with Richard Nixon, Ronald Reagan and the religious right.

Like Peter many contemporary Christian leaders oblivious to the complex, evolving theology of Reverend Graham claimed him as the champion of their own beliefs and that was the voice I heard.

While I might not agree with all of his theology, I cannot help but stand in awe of someone who motivated so many people to pay attention to scripture and the lessons of Jesus Christ.

Billy Graham was a person who took the gifts God had given him and used them to promote good in the world.

Perhaps the greatest legacy he leaves is the example of how to live a life of faith, trust and humility.

One commentator summed it up:

“Now that Billy Graham’s gone, his many admirers can only hope that his true legacy is in the quiet moments of self-reflection and spiritual discovery he inspired in many millions of people, for whom his version of old-time religion offered all-encompassing love, not self-righteous hate. But his long career at the crossroads of religion, popular culture, and politics is a reminder of how hard it is to distinguish the power of God from the God of power.”

I have also been intrigued this week by the news of the Russian bots planting divisive and inflammatory items on Facebook, Twitter and other social media platforms.

It raises the question of who we can trust for news sources, for information, for clarity on issues.

I can’t help but wonder how often people think they know something when in reality they have been subject to someone else’s interpretation of events.

Seeds of doubt can be artfully sown by someone who capitalizes on our own vulnerabilities.

When I worked with battered women we used to talk about the impact of words.

I would explain to audiences “If someone tells you everyday that you are worthless and ugly and that no one else would ever want you, after a time you begin to believe it.”

If you restrict yourself to people whose thoughts and opinions are exactly the same as yours, you will not challenge your beliefs or examine your doubts.

You will cut yourself off from evolutionary, organic change.

The counter to this, for a person of faith, is the voice that calls us beloved and blessed.

Our God of the covenant has promised to be with us wherever we are on our journey.

Jesus Christ has shown us that trust in God is the ultimate freedom, overcoming even death.

The words of our anthem this morning from an anonymous Jewish poem written on the walls of the Auschwitz concentration camp:

“I believe in the sun, even when it’s not shining.

I believe in love, even when I don’t feel it.

I believe in God, even when God is silent.”

Perhaps Evangelical preachers like Billy Graham put us off by their certainty when we know we have doubts.

Perhaps it is their certainty that attracts people, hoping to allay some of their fears and anxieties.

If committing your life to Christ seems daunting, consider the costs of a life without faith.

Faith, my friends, is the greatest gift God bestows upon us.

Choosing to receive that gift and to live with trust is transformative, life-changing.

Trusting in God’s covenant promise and our own goodness is the key to a faithful life.

As we move through Lent, pay attention to the voices you are listening to.

Seek honesty in your life which includes acknowledging doubts.

Be the person that God created you to be.

Use the prophet’s words to measure yourself and those you encounter:

What God requires of you is to do justice, love kindness and to walk humbly with your God.

Gracious, holy God of the covenant, present to us throughout our lives, be with us this morning as we pray for courage to live a Christians in this world.

Help us to recognize your presence in ourselves and our neighbors.

Open our hearts to understand the ways that we might live out your call to justice, mercy and forgiveness.

In this season of Lent we repent for our sins and we yearn for transformation.

Change us into disciples capable of modeling Christ-like behavior to the world.

We thank you God for allowing room for our doubts as well as our praise.

Help us to believe and to trust in your almighty power.

Hear now our prayers for those whom we love.

For those who are sick, we pray for healing.

For those who mourn, we pray for comfort.

For those who have never encountered you, we pray that the Holy Spirit will find them and bring them to peace.

O God, we pray for our tumultuous world that we might find a way to bring your reign to fruition.

For every created being, we offer our thanksgiving and praise.