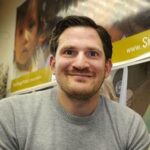 A few years ago I walked into our house in Connecticut and immediately knew something was wrong. My wife Kristen, as well as a few Simply Smiles interns who were living with us, were sitting on the edge of our couch. When they looked up at me, their faces were covered in shock – and with tears. One of them managed to muster that “Tagger had killed himself”.

And our walls came tumbling down.

Tagger was a 12-year-old boy who lived on the Cheyenne River Indian Reservation in South Dakota – and we loved him dearly.

Fed up with the difficulties and hopelessness of life on the Reservation, Tagger had walked into his family’s FEMA trailer… and hanged himself.

He was the second child we had lost to suicide that year.

This fall… I walked into my house and saw our dog’s leash on the hook by the door. I paused, rolled up the leash, and hid it in a drawer because I was afraid that the Simply Smiles scholarship student from the Reservation who was living with us might use it to hang herself.

Simply Smiles has spent the last 10 years embedded on the Cheyenne River Indian Reservation in South Dakota living and working side-by-side with Lakota people who are the survivors of an intentioned effort by the United States of America, and our colonizing predecessors on this land, to kill each and every one of them. When that effort failed to kill their bodies, new efforts were put in place to kill their spirit and their culture. As recently as last winter, their sovereign territory was encroached upon by an oil pipe-line that endangers their land, endangers their water supply, and the presence of which will not benefit them one single bit. The “Water Protectors” on that land were forcefully ejected with guns and armored vehicles.

– The average life-expectancy for a male on the Reservation is 47 years old.

– The ethnic group most likely to die from violence are not African Americans, but Native Americans.

– The unemployment rate is 90%

– And the youth suicide rate is 8x the national average – The Cheyenne River Reservation suffers an average of 6 suicide attempts, per week.

I know… I didn’t believe it at first either. How could this be, here in one of our states, within the wealthiest and most generous country on earth?

But I’ve personally spent years living on the Reservation. I’ve seen all of this with my own eyes, heard the truth with my own ears, and touched this reality with my own hands.

My friend, the Nobel Prize nominated Lakota activist, Tiokasin Ghost Horse, first brought me to the Reservation. He saw the work we were doing in Mexico – how we were doing that work – and he believed very strongly that the Simply Smiles model, how we approach a need, was what the people living on the Reservation needed. During my first visit, within those first minutes, as my senses took in the situation around me, I pledged that we would offer every resource of Simply Smiles – including this pulpit – to the Lakota people, so that the course of history could be corrected. And so that every Lakota child would have the ability to DESIRE, to PURSUE and to ATTAIN the bright futures that they deserve.

But being welcomed, and trusted, on the Reservation – so that we could even try to work toward this goal – was hard won…

The perpetrators of these actions – and of these results – are people who have more often than not looked exactly like I do. General George Custer (of Battle of Little Big Horn) infamy was a tall white man as well. The missionary priests who sought to “kill the Indian and save the man” were men from the east coast too. The congressmen who recently cut the Indian Health Services budget even further… well… we know what demographic most of them are part of. And the church group who dumped a truck full of used clothing in the center of town and drove away… they’re from this world too.

At first, almost nobody did.

“Don’t believe anything we say, we are here to steal your land”

When the deacons, invited me to share the pulpit this morning I knew right away that I wanted, needed even, to take this opportunity to articulate in stark and honest terms the depth and breadth of the historical and current challenges faced on the Reservation. As we began to plan for this Sunday, Winona had moved out of the college dorms after just a few days on campus and she was living with my wife, Kristen, and me. We were struggling to help her to stay in school and avail herself of this amazing opportunity, this life-changing scholarship — and we were frayed and scared. Scared enough to hide the dog leash.

It took years of effort.

Years of one step forward three steps back.

Years where on paper, Simply Smiles should have given up on the Reservation and taken our efforts elsewhere.

But we stayed. We listened. We learned. We kept trying to alleviate the suffering in any way we could.

Then one day in 2012, out on the Reservation, our phone rang. On the other end of the phone was a respected elder of the community. She told me that she and the other elders had gotten together, and that they wanted to make me part of the tribe and bless me with a Lakota name.    The very next evening I stood in the prairie, surrounded by over a hundred Lakota people, as a medicine man blessed me with an eagle feather from the north, the south, the east and the west. He prayed in the Lakota language and gave me the name “Cante Waste Wicasa”, “Kind Hearted Man”.    And in that moment everything changed. I, and everyone under the banner of Simply Smiles, were no longer being painted with the same brush as Custer or as the colonizers. We were now seen as friends, as humans who walk under the same sky — and as a source of hope. With my Lakota name came acceptance, partnership, and a great responsibility. The elders charged me to go out into the world – into this world – into this sanctuary – into this congregation – and be a voice for a people who long ago were stripped of theirs. One of those elders, Ford Hill, said it best: “Unity is the only way we’re going to survive”.

Winona is back on the Reservation now.

She’s safe. She lives in a trailer with her mom, step-dad, and baby brother.

Her leaving college was of course incredibly difficult. And we’re all still a little sad and still a little frightened about what her future will hold.

But Laura, Julia, Sarah, Juan and so many other children are there on the Reservation too, and their dreams and aspirations are being nurtured by Simply Smiles. When it’s their turn to go to college we’ll try again.

So this is my prayer:

This simple prayer, this simple wish, is changing the Reservation for the better each and every day. It gives me confidence and quells my fears.     How?    Because YOU are the embodiment of these words come to fruition. You’ve heard the stories I’ve shared with you. AND YOU ARE PEOPLE OF JUSTICE. PEOPLE COMMITTEED TO RIGHTING WRONGS. You are living the model for how change, even in places where poverty and despair and brokenness are most entrenched, – you are the model for how change is still possible.

In a place where winter temperatures routinely reach -50 degrees in the winter and 110 degrees in the summer, working side-by-side with the people of the Reservation, -you – our Simply Smiles supporters and volunteers have built five brand new houses for families who were in desperate need of shelter, of a home.

In a place where the nearest market is a 64 mile round-trip away, and where healthy food is either unavailable or unaffordable, you, our Simply Smiles supporters made possible the creation of an organic farm and greenhouse that produced over 1,000 pounds of fresh produce this season alone.

Thousands of volunteers have traveled to the Reservation on Simply Smiles service trips. Your presence shows in the most powerful and personal of ways that that we are in this together. And that we will right this wrong.

In the past five years, in the town of La Plant on the Cheyenne River Sioux Tribe Reservation in South Dakota, we have lost 3 children to suicide. Most recently, a 13-year-old girl named Rachel. Our work, together, — Simply Smiles, the Lakota people, and The Congregational Church of Salisbury… continues.

Because of the spread of the new coronavirus and COVID-19 disease,
all public church activities have been suspended,
and church offices remain closed.
Please stay at home and stay safe!

On Sundays at 10am
we will live-stream our worship
so you may participate wherever you are.